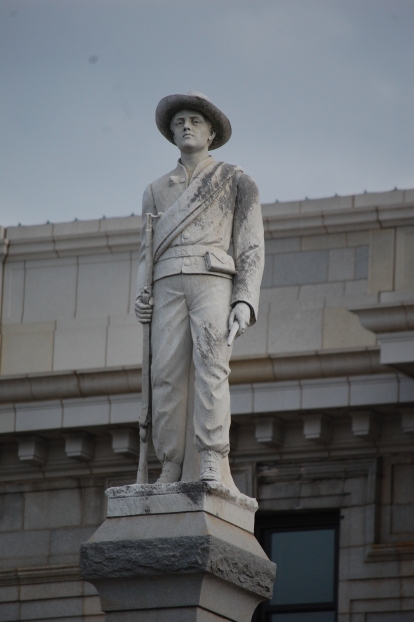 Once again, I feel as if the news is happening more quickly than I can react or respond to it. I’m an academic, not a journalist, and a scholar of the nineteenth century at that, and so I’m used to having a lot of time to sit back and ponder my source material in order to craft perfect arguments. In the past few days, I’ve mentally written and rewritten this post several times, trying to keep ahead of new developments. But eventually, one must move forward.

The deadly events in Charlottesville, Virginia over the weekend are by this point well known. Protesting the planned removal of the city’s monument to Robert E. Lee, neo-Nazis and white supremacists sparked a violent clash that resulted in the deaths of a counter-protester, Heather Heyer, and two police officers. It is hard to talk about the material circumstances of monuments when human lives are at stake and when it feels like the nation is ripping apart at the seams. But in just the past few days, the toppling of Durham’s Confederate statue and the removal of four monuments in Baltimore have shown that the need to grapple with the fate of Confederate monuments continues.

I’ve written before about the white supremacist origins of these monuments, and so I’m not going to reiterate all of that here. In the past few days, there have been several powerful articles laying out the case for removal, including this one by Yoni Applebaum in The Atlantic and this one by Nicholas Mirzoeff. The connection between Confederate monuments and the evils of slavery, the horrors of the post-Reconstruction era, and the attempted suppression of the Civil Rights Movement are all well-documented for anyone willing to listen to historians. None of that has changed.

But my own thinking on what to do next has shifted. In the past, I’ve argued for a measured approach to the removal of monuments. In both the North and the South, soldier monuments illustrate a tension between the local and the national: they respond to the Civil War, and they are connected to one another due to their standardized form. But each monument bears the names of local soldiers, was paid for by funds raised locally, and is governed by local laws. Because of this, it would be impossible to remove every monument at once through a single federal order, and I have suggested that letting the process work itself out locally would probably be the best course of action. For this reason, I am also opposed to actions by the states of North Carolina, Alabama, and Tennessee to take the agency away from local communities and to prohibit altering Confederate monuments at the state level. For a movement so concerned with issues of government overreach, this strikes me as an odd move.

But Durham changes everything.

I have watched this video several times on loop, partly out of professional curiosity. I have thought and written about vandalism and iconoclasm related to Civil War statues for years, and pictured the act in my head, but I hadn’t really thought about how it would actually look. The way the statue crumbles is fascinating. I don’t think, as several news outlets have suggested, that this is due to shoddy materials: for one thing, the statue doesn’t look like zinc to me, although I’d have to see it in person to be sure. What seems more likely to me is that the bronze bent at its weakest points due to the huge block of granite falling down with it. No way could a hollow-cast statue compete with that sort of weight.

But there’s something else that is even more important. The video from Durham makes iconoclasm look easy. A bit of rope, a ladder, one hefty tug, and suddenly it no longer mattered how many laws North Carolina had passed against altering monuments. And if I had that thought, I probably wasn’t the only one. That means this is going to happen again, and probably soon. And we don’t know where it will happen next.

So, my recommendation has changed. Communities, if you want to preserve your Confederate memorials, it would be best for you to start making a plan for them now. Move them out of town squares or into parks or cemeteries. Put up new text to present the true historical record of the Confederacy rather than Lost Cause mythology. Invite contemporary artists to engage with them and to set up temporary installations. Commission new monuments to individuals who deserve representation in our parks and civic spaces. But do it soon, because Durham is the crest of a wave that may soon be beyond your control.

One thought on “After Durham: What’s Next for Confederate Monuments?”

Sarah Beetham is an art historian specializing in the art of the United States. She currently resides in Piscataway, New Jersey and is employed as Chair of Liberal Arts and Assistant Professor of Art History at the Pennsylvania Academy of the Fine Arts.