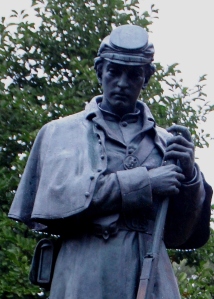 “Activism in the Classroom: Wikipedia and American Art.” Panorama: Journal of the Association of Historians of American Art 2, no. 2 (Fall 2016). LINK

“From Spray Cans to Minivans: Contesting the Legacy of Confederate Soldier Monuments in the Era of ‘Black Lives Matter.’” Public Art Dialogue 6, no. 1 (2016): 9-33. LINK

Review of A Sisterhood of Sculptors: American Artists in Nineteenth-Century Rome, by Melissa Dabakis. Southeastern College Art Conference Review 16, no. 5 (2015): 680-682.

Review of The Nation’s First Monument and the Origins of the American Memorial Tradition, by Sally Webster. Panorama 1, no. 2 (Fall 2015). LINK

COLUMNS, COMMENTARIES, AND OTHER PUBLICATIONS

“Teaching American Art to American Artists: Object-Based Learning at the Pennsylvania Academy of the Fine Arts.” Panorama 2, no. 1 (Summer 2016). LINK

“Army of the Dead: Civil War Monuments, the Lost Cause, and the Afterlife of Memory.” Master’s Degree Program in the History of Decorative Arts, George Mason University, Washington, D.C., June 1, 2015.

“Bivouac of the Dead: Confederate Monuments and the Politics of Mourning.” The Art of Memory and Mourning: A Symposium in Honor of Cynthia J. Mills, Smithsonian American Art Museum, November 14, 2014. LINK

“On the Grand Tour” – a blog detailing my experiences in Italy through the Ailsa Mellon Bruce Predoctoral Fellowship for Historians of American Art to Travel Abroad in Summer 2010.

Sarah Beetham is an art historian specializing in the art of the United States. She currently resides in Somerset, New Jersey and is employed as an Assistant Professor of art history at the Pennsylvania Academy of the Fine Arts.

So, does eating this pasta count as #iconoclasm? #monuments
Side effects of being a #monument nerd may include finding random caches of #vintage postcards while organizing your office supplies #CivilWar #CivilWarMemory #CivilWarMonuments #Gettysburg #AmericanSculpture
Feels good to be home again! @pafacademy #fallsemester2019 #professorlife #AmericanSculpture #AmericanArt
First day back in #Philly at @pafacademy means hot pastrami at #readingterminalmarket! #firstdaybackatwork #fallsemester2019
Moving out of my DC apartment and the truck was too small: Thanks #UHaul for swapping it out for a bigger one free of charge! #uhaulfamous #postdoclife #GoodbyeDC
Goodbye, SAAM cubicle! On to new horizons #postdoclife #GoodbyeDC