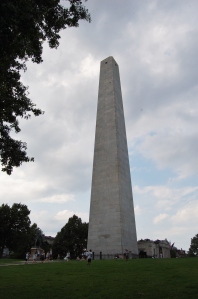 I’m currently up in Boston for a two-week stay to finish out the remainder of my time as a Suzanne and Caleb Loring Fellow on the Civil War, Its Origins, and Consequences at the Massachusetts Historical Society and the Boston Athenaeum. I’m spending my last two weeks at the MHS revisiting some great material I unearthed during my previous visit last September, which is keeping me quite busy. But yesterday I had the pleasure of visiting a site that has long been on my mind: the Bunker Hill Monument on the site of the famous Revolutionary battle. This 221-ft obelisk was erected between 1823 and 1842 and dedicated on June 17, 1843. Inside, there are 294 steps leading up to a small landing with four windows that offer a remarkable view of the city of Boston and its harbor. The monument was erected after years of fundraising by an extremely dedicated Bunker Hill Monument Association, and I often come across records of the association’s activities when I am conducting research on my Civil War statues. Today, the monument may seem rather commonplace – one of many tall obelisks honoring important people or events in American history with a view of the surrounding landscape. But the Bunker Hill Monument is one of the first of its kind, and thus served as a model for the others that followed.

I left the MHS at about 3pm yesterday to take the T across town before the monument closed at 5pm. When I arrived, I obtained a free ticket for a 4pm climb at the Bunker Hill Museum across the street from the monument, and then made my way to the base of the obelisk. Inside, the spiral staircase is narrow and steep, with every 25th step numbered to encourage climbers to make it all the way to the top. About halfway up, I began to regret the fact that I haven’t been exercising lately. By the time I got to the top, I was huffing and puffing, but I was rewarding with a terrific view. 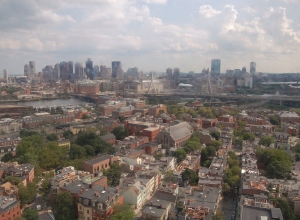 While I was admiring the view, the little room at the top of the monument grew very crowded, as several people who seemed to be part of a tour came up shortly behind me. Because of this, I left a little sooner than I might have otherwise, and encountered many fellow climbers on the way back down the stairs, waiting for their chance to get a look at the view. This part was a little panic-inducing, as I am both claustrophobic and afraid of heights, but I have found that I am willing to push a lot of my own phobic boundaries when monuments are involved. 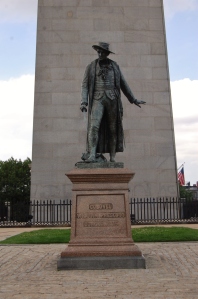 Outside, I encountered a fine statue of Colonel William Prescott by the American expatriate sculptor William Wetmore Story. Erected in 1880, this memorial to the commander of American forces at Bunker Hill depicts him holding out a hand to stay his troops’ fire until the enemy approached near enough to reveal “the whites of their eyes.” The sword in his hand is modeled on the original artifact, passed down through the Prescott family and now in the collection of the Massachusetts Historical Society, where I am currently a fellow. One thing that constantly amazes me when I conduct research in and around Boston is the interconnectedness of leading Boston families and institutions. For instance, I am currently working with letters written by Huntington Frothingham Wolcott, a Civil War soldier who joined the 2nd Massachusetts Cavalry in February 1865 and followed the regiment through the desperate last days of the war: the battle of Five Forks, Appomattox, and Lincoln’s assassination, only to die on June 9, 1865 from malaria contracted during his time in the army. His younger brother, Roger Wolcott, eventually married Edith Prescott, a great-granddaughter of Captain William Prescott. And this is only one of many family connections I have found among the various subjects of my research. 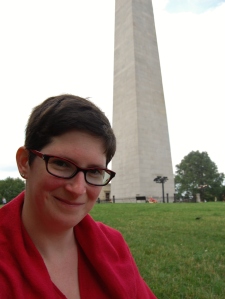 And to end this post, here I am next to the Bunker Hill Monument. It was a lovely afternoon jaunt, with beautiful weather, and I spent a few pleasant moments sitting on the grass before I departed. I expect that there will be more Boston monument adventures before I head back to Delaware.

Leave a Reply to An Academic Year in Review: Reflections on Teaching and Writing – Sarah Beetham, Ph.D. Cancel reply

Sarah Beetham is an art historian specializing in the art of the United States. She currently resides in Piscataway, New Jersey and is employed as Chair of Liberal Arts and Assistant Professor of Art History at the Pennsylvania Academy of the Fine Arts.